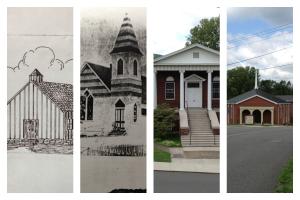 First Church, Narrows is a church with a rich history that runs deep within the Giles County community and beyond. Methodism came  to Giles County as early as 1780. First Church, Narrows was originally part of the Pearisburg Circuit in 1872 when private homes were used as meeting places and the community of Narrows, Virginia was beginning to form. The church was formed by F.N. Priddy in 1871 when he organized a Sunday School in a tobacco factory. The first church building was completed in 1872 and dedicated in 1873. By the 1890s, the congregation and the town of Narrows had outgrown the present church and a new building was completed in 1896. Again, in 1913, a committee was organized to look at the possibility of building a new church due to rapid growth. The church was decided upon in 1917 but was interrupted by World War I, in which plans were laid aside. Nonetheless, the new church was completed in 1922 during the tenure of Rev. J.R. King.

The Narrows Circuit was formed in 1926 and First Methodist Church was included in that circuit. During that time, the Women's Missionary Society raised funds to complete the church basement. The Great Depression of 1930 hit the nation as well as the church as debt for the church had not been paid off. By 1937, that debt was completely paid and the church was dedicated on September 5, 1937.In 1939, due largely to the growth of the town by the Celanese Corporation, Narrows church was made a station when Rev. Harrell M. Russell served as the pastor.

Again, in 1964, plans were made while Floyd C. Davis was pastor for a new church building due to rapid growth. The plan was approved in 1965 and completed in 1968. On October 21, 1979, the church sanctuary was dedicated.
On July 11, 2008, the church launched narrowsfirst.org. On October 26, 2008, with 165 people in attendance, the congregation of First United Methodist Church of Narrows celebrated its 39th Anniversary of the new building with a homecoming celebration and preaching by Bishop James Swanson, Sr.
Works Consulted:
Cornelia Woodson Smith, A Brief History of The First United Methodist Church in Narrows: 1870-1989. (2000)